Jim Meyer :: ranked as a leading criminal and regulatory enforcement solicitor
Home → Blog → How can you defend someone you know is guilty?

How can you defend someone you know is guilty? 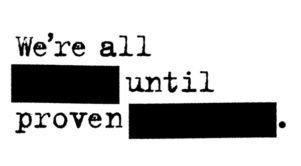 One of the most frequent questions that I am asked by non-lawyers is: “how can you defend someone who you know is guilty”. The simple, pithy, answer is “that’s my job”, but, in truth, it is way more complicated than that.

I work on the basis of what my client tells me

Firstly, if a client tells me (s)he is innocent then I don’t go behind that. I assess the evidence and I advise on the strengths and weaknesses of the case, but I have been doing this job long enough (over 29 years now) to know that strange things do happen. What at first seems implausible becomes plausible.

The bottom line is that when a client tells me their version of events I will work on the basis of that version; I will probe their account, point out any inconsistencies and give the client the benefit of my experience in terms of what I think a court will make of it but, make no mistake, I will do all that I properly can to prove my client’s version of what happened.

“Legal guilt” is not the same as “factual guilt”

Secondly, “legal guilt” is different to “factual [or even moral] guilt”; I know that may sit uncomfortably with some, but what this means is that even if a client has admitted their guilt to me I will zealously and rigorously defend them, making sure that they are not convicted of any offence unless and until the prosecution does its job and proves this so that the triers of fact (i.e. the jury or the magistrates) are sure.

This doesn’t mean that my client and I engage in a process where we “work the angles” and come up with the most believable “story”; it means that I assess the strength of the evidence and if I think the prosecution cannot prove their case then, regardless of whether the client admits the offence or not, I will advise that a not guilty plea is entered. Even if a client admits guilt to me, I will test their account and version of events so that I am certain that:

A person may lie to cover up for someone else, or other factors may be at play.

I’m guilty, but not of what they say

It is not uncommon for a client to tell me they have done something wrong, but it’s not the crime they’ve been accused of. The same rules as above apply but, once I have established that the prosecution can actually prove its case, I will see if it will accept a plea to a lesser charge, or on a basis more favourable to my client (so that my client receives the most lenient sentence). This could be on the basis that my client pleads guilty to a different offence, or that the harm that my client is alleged to have caused or the culpability (s)he is alleged to have is less than previously asserted.

I don’t tell my clients what to do; I advise them of their options and I tell them what I think is in their best interests, but ultimately they must be the ones to decide on a particular course of action. Ultimately, my opinion of my client’s guilt or innocence is only important in terms of my assessment of their prospects of a successful outcome; it does not determine what, or the level of, service I provide. All my clients are defended to the best of my ability, without fear or favour. When the prosecution decides on whether a client should be charged they have to assess whether there is a realistic likelihood of successfully convicting him/her; that is a much lower test than that applied in court, and the magistrates or jury must be sure (which is the same things as beyond reasonable doubt).

This site uses Akismet to reduce spam. Learn how your comment data is processed.